First day of holidays! Sleep in!
Not!
The lure of treasure abounding motivated boys to wake up at 6am, get dressed and ready to be on the doorstep of the garage sale down the road at 8 on the dot. In my stupour and with cup of tea in hand I went with them.
I struck gold!!!!

First thing I saw was a retro Toastie Toaster jaffle iron–the round ones that make deep flying saucers of toasty suprises. They sold it to me for $5 and wanted to sell me my mug too but were slightly puzzled that they didn’t quite recognize it.

Boys scored a 60’s toy basket full of real marbles–and eyed off a manner of other goodies.
We were to return…

I put my jaffle iron straight to work and made a breakfast egg jaffle. Totally out of practice, the top of jaffle stuck to the iron and tore…big mess, but yummy. Need to spread more butter on bread.

To market and Random Lunch Challenge was a challenge and stretch, but perseverance pays off.
The idea of a cob of corn wrapped in bacon and BBQed came to mind, but frustration set in when the cost of corn seemed prohibitive. Boys learnt that ideas may be good but seasonality is something to bear in mind.

Light bulb moment occurred when one boy suggested wrapping bacon around a length of leek…the ensuing to-ing and fro-ing of ideas led to the master plan: Leek wrapped in bacon, sauteed in butter, braised with verjuice to a soft, sweet caramelized parcel, 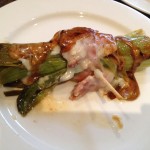 topped with Gorgonzola dolce latte then baked in the oven until the cheese forms an unctuous melted coat on the leek. We struck gold!

A phone call from The Quality Controller’s brother led to an extra person partaking in the results of the challenge, and bringing a fresh loaf of crusty olive bread to mop up the sauce.

Random lunch challenge, apart from pantry verjuice and butter, and the contribution of bread, fed 5 for $8.50.

We returned to the garage sale and I was about to strike gold again but the lady realized she didn’t really want to sell her gorgeous Moroccan teapot that I had visions of using in a Moroccan banquet. Sigh.

A boy got some travel Scrabble and a retro German butter curler instead.
And I do already have a Moroccan teapot…